The Hobbit Owls of the West

I don’t normally go to extremes to get photographs. I am an image opportunist, a scavenger of beauty and wonder. I put myself in locations where there’s a good possibility of seeing something special, but I don’t come with a definite agenda. Often I go photographing when time allows, which may not coincide with the best light, weather or animal activity. Some photographers try to be strategic about every aspect of their shoot, planning every detail ahead. I find that the more I try to control the outcome, the more often I am disappointed. Plus, it’s more fun for me to just wander, pay attention and see what nature will reveal. I have ideas but wild nature consistently surprises me with something I couldn’t have imagined.

I slightly departed from this philosophy last spring. From Arizona I was heading to Newport Beach in California to meet with an old friend. To get there I needed to cross parts of Southern California I had never seen.

Recently, photographs of burrowing owls (Athene cunicularia) had been showing up on the California Birding Facebook page. These little birds are the hobbits of the owl kingdom. Most owls are tree dwellers, hidden by foliage, nesting in trunk cavities. Burrowing owls live and nest in underground dens usually in flat areas with few trees and minimal vegetation. They stay close to the ground, hunting rodents and insects. This makes them very visible when they are out, often in small groups, surveying the land. I fell in love with these cute ground-dwelling owls with their big bright yellow eyes, pronounced eyebrows and long legs (for an owl.) Maybe I could find one!

Burrowing owls are spread over the West and Florida but you have to know where to look to see one. Unfortunately, their burrows are easily destroyed by farming and land development. Many conservation groups work hard to protect them and sometimes provide artificial burrows made of PVC pipe and buckets which, surprisingly, the owls will use. They prefer old prairie dog and ground squirrel burrows but as those rodent populations decline so do the owls.

Only a slight detour would take me to the Sonny Bono National Wildlife Refuge (SBNWR) where other birders had seen these elusive creatures. I was now determined. Burrowing owls or bust!

After two days of driving I arrived at the refuge. The area, near the receding Salton Sea, was flat and dusty and overtaken by industrial farming. I passed by fallow fields, large storage buildings and all manner of agricultural machinery. It was the end of March and very hot, in the upper 90s. There wasn’t much to see at the SBNWR and the visitor center wasn’t even open.  I eventually spotted someone watering plants and I asked her where the burrowing owls were. She told me that the SBNWR has two separate units, several miles apart and I was at the wrong one.

By the time I made it to the other unit it was mid-afternoon. The sun was blazing and the wind blew hard. I was the only person there. This section of the refuge was comprised of a few square fields with shallow water in them. A variety of wading birds could be spotted: egrets, white-faced ibises, willits and northern shoveling ducks.  No owls. They are most often seen in morning and early evening and not in the heat of the day.

After exploring the area, I gave up and headed for my motel for the night. My focus and determination had led to a wild goose (owl) chase. I decided I needed to stick with my extemporaneous, agenda-free photography style.

To get to the main road was a three mile straight, gravelly dirt stretch. I had nearly reached the pavement when my eye caught something standing on an embankment to my left. I realized it was – you guessed it – an owl!

Hitting the brakes, I stopped in the middle of the road, and grabbed my camera. Trying to use the car as a blind, I crawled slowly out of the front seat, hoping not to startle the bird.

Even better, I then spotted two more owls across the street perched atop tall wooden stakes with plastic marker ribbon flapping in the wind. Later, looking at the photos, I chuckled as I realized the markers said “OWL BURROW.” I was looking everywhere for these birds and they had signs pointing to them! (The stakes were there to help farmers and road workers avoid them.)

The lighting was harsh and backlit but I did my best to capture these unusual little raptors. It could be the last time I ever see a burrowing owl but I really do hope we meet again. Maybe next time I’ll plan better. Maybe not.

Your comments are appreciated! 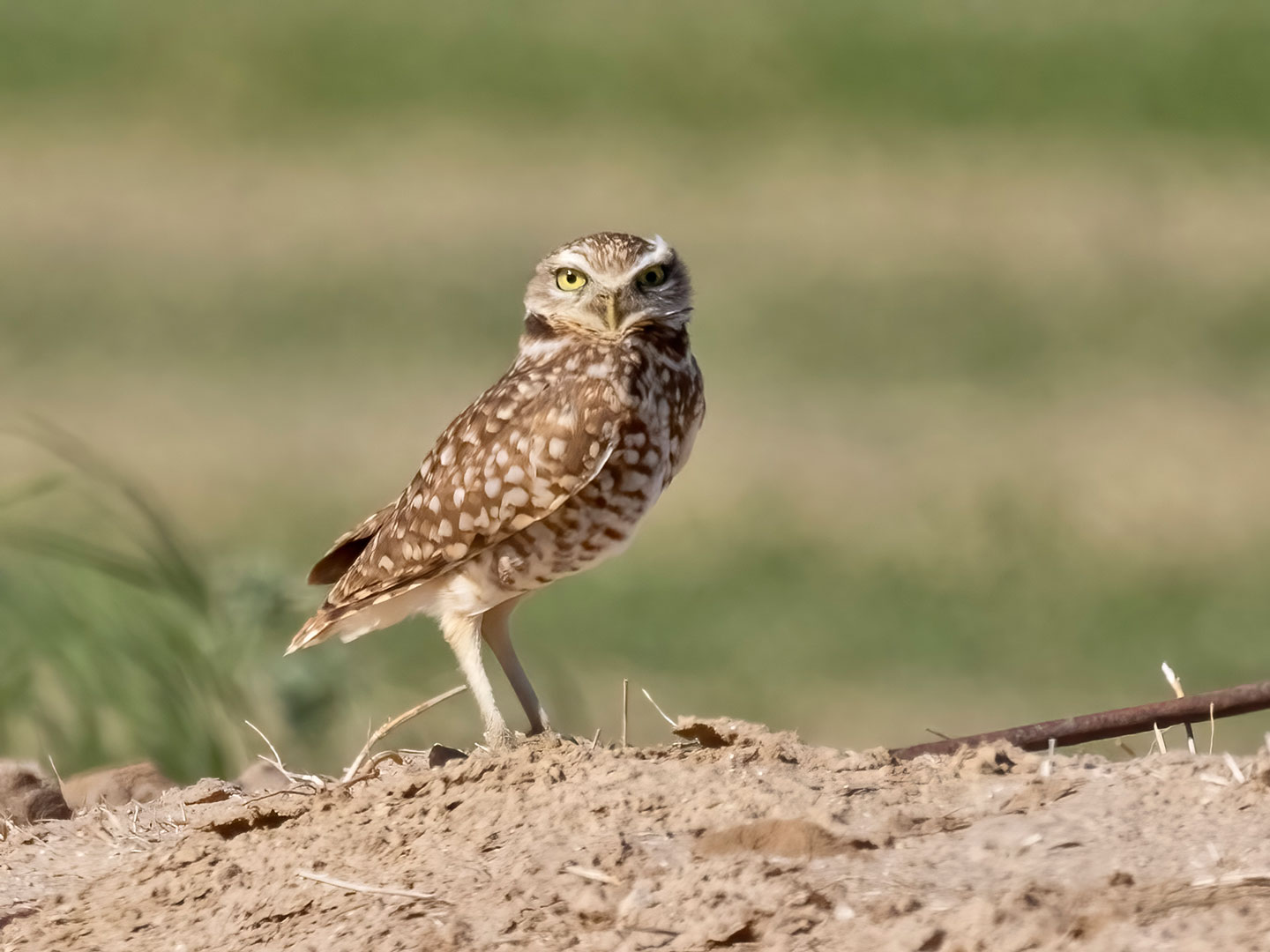 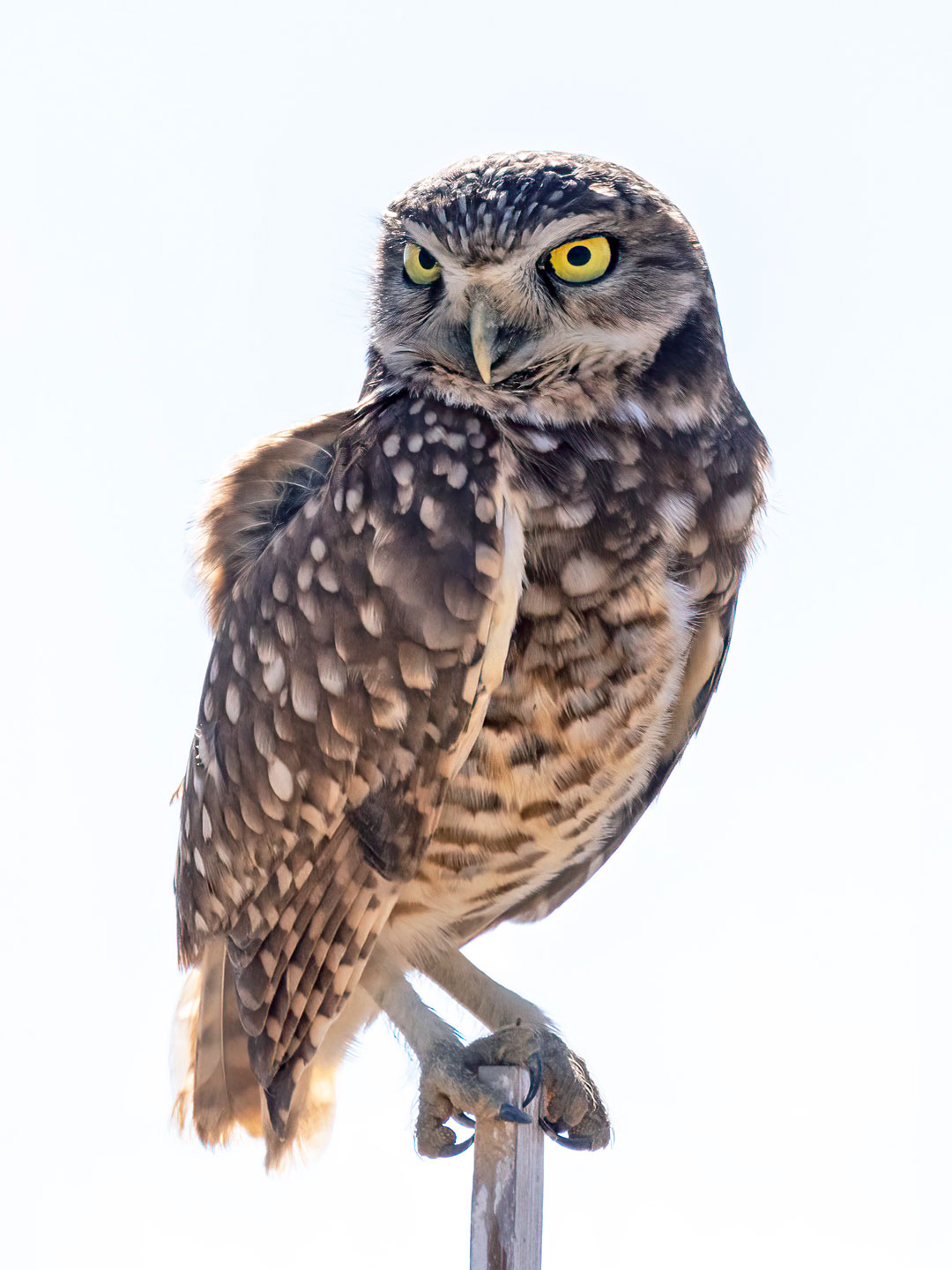 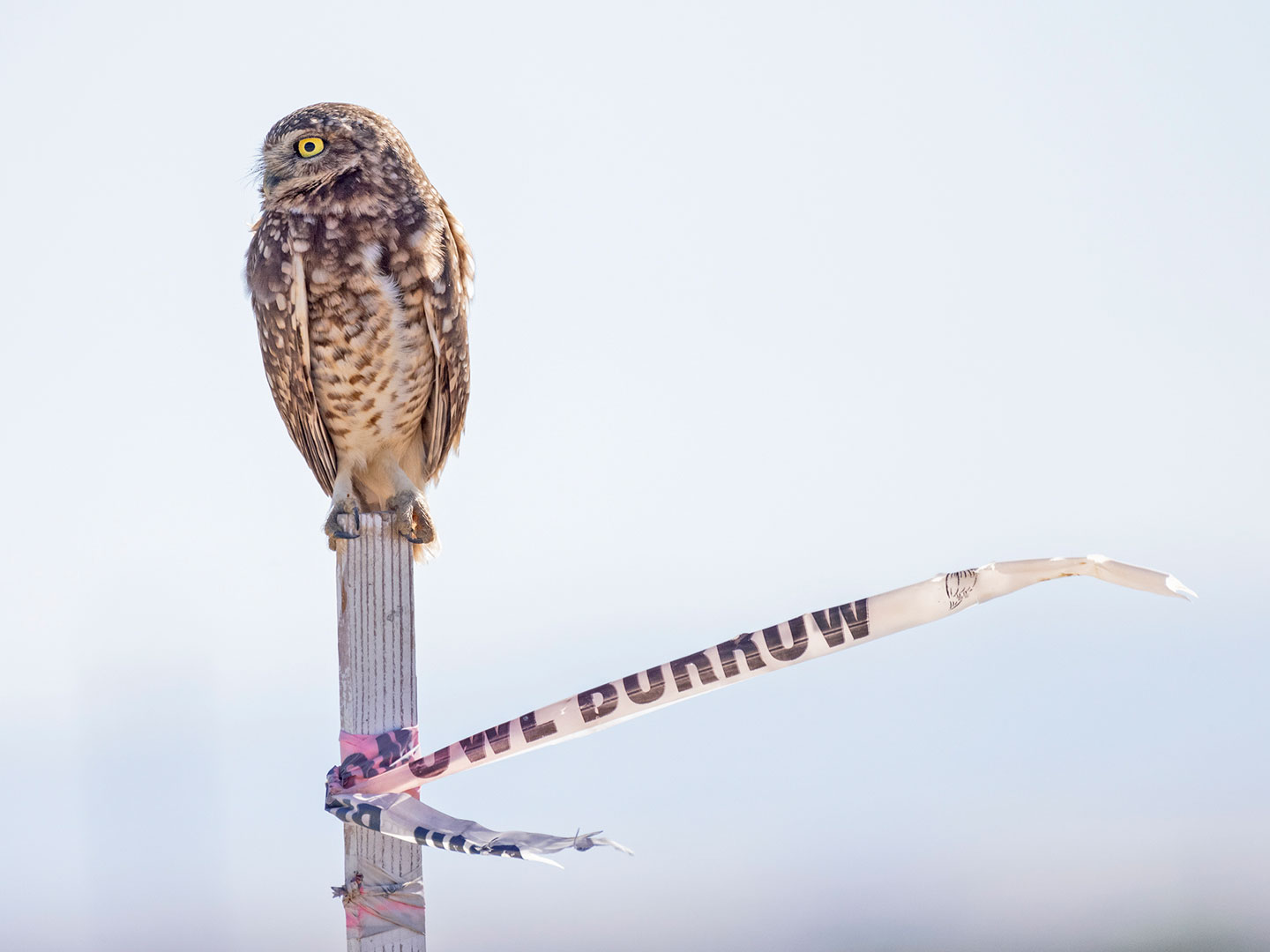 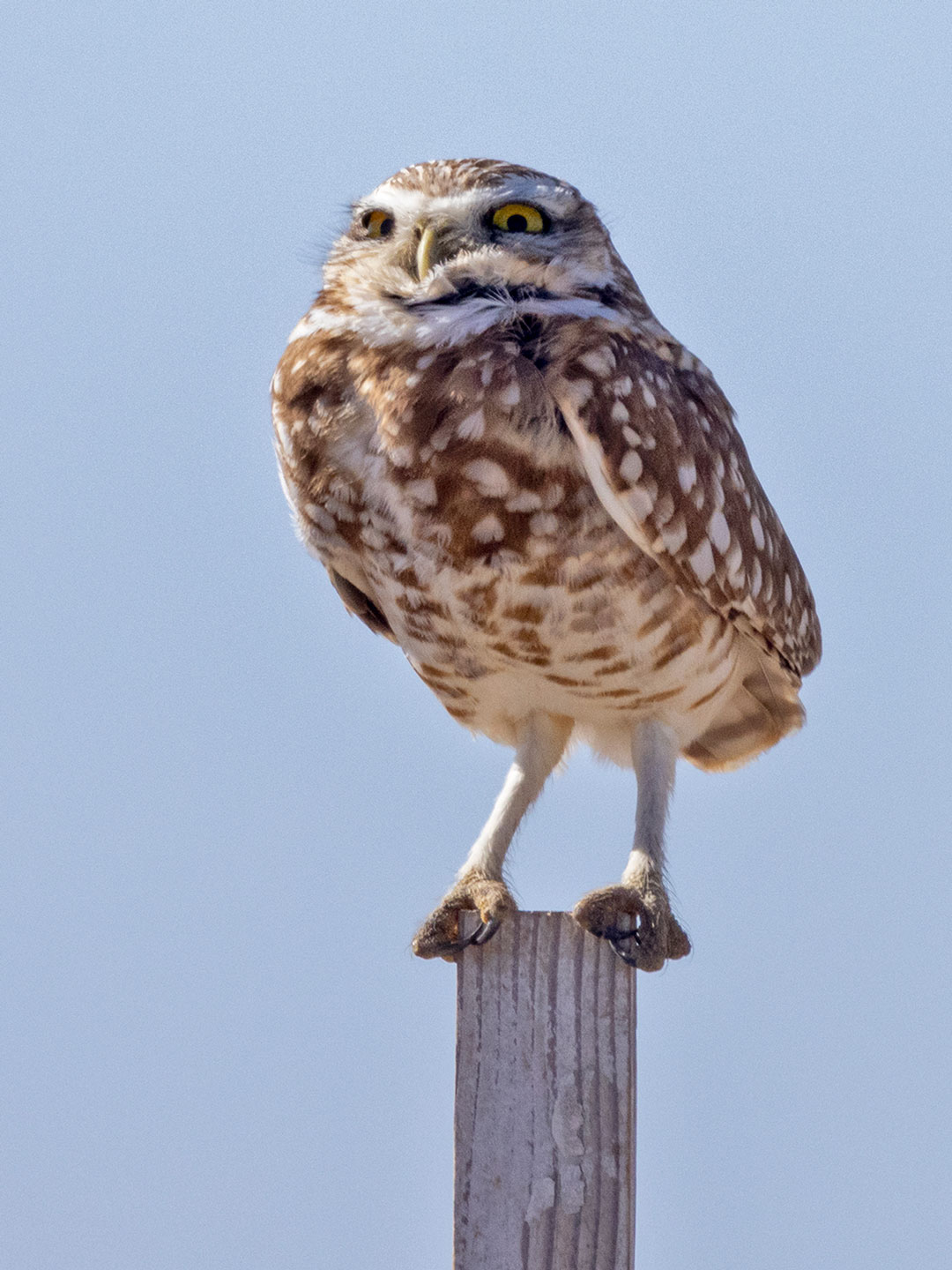 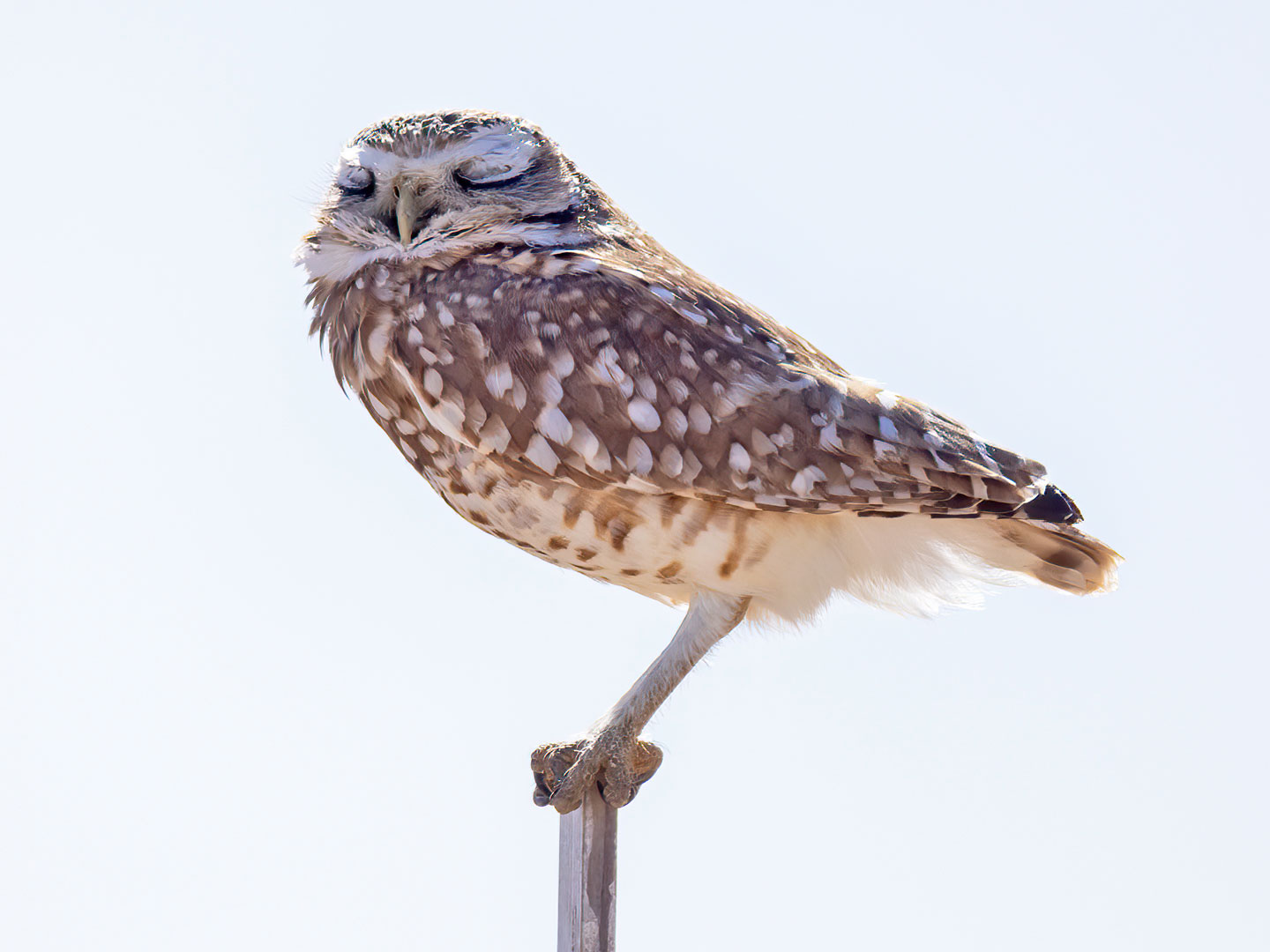