Out for my weekly dose of Vitamin Sea, I wandered the beaches of Scott’s Creek along Highway 1 just north of Davenport, CA. This has become one of my favorite stops because it offers a variety of beach habitats and is easy to get to from my car. (To access many of the beaches along 1 you must climb down steep eroded cliff paths to reach the water. This becomes even more dicey when you are carrying heavy photographic equipment.)

When I arrived there yesterday about noon, the water was as high as I have seen it; a full moon tide. The usual tide pools were under waves. So I meandered the water line taking in the chilly sunny day, looking for whatever presented itself.

AMERICAN GOLDEN-PLOVER
One lone shore bird (the rest of the birds I saw were gulls) danced at the water’s edge hunting small tasty crustaceans. I wasn’t sure what it was as many of the shore birds look similar (to me anyway.) But later I identified it as an American Golden-Plover in its non-breeding plumage (the longer wingtips distinguish it from the Pacific Golden-Plover). This lonely bird was on its 12,000 mile migration to South America from summering in the Arctic, stopping along the California coast for food. These Plovers have one of the longest migratory routes in the world.

NORTHERN HARRIER
A female Northern Harrier caught the sea winds at the top of the cliffs perfectly, allowing it to hover, without flapping, in one place as it looked for a meal. Later I saw it carrying a rodent in its talons. (It was a bit too far to get a really good photo.)

CALIFORNIA GULL AND OCHRE SEA STAR (STARFISH)
This gull found a prize and eventually consumed it. I was glad to see the sea star since the Pacific coast population of Ochre Sea Stars has been decimated in recent years from “starfish wasting disease” thought to be made worse by higher water temperatures. I used to frequently see large orange, purple and brown sea stars in the tide pools but I haven’t spotted one in years. This gull lowered the current sea star population by one but at least this sea star looked healthy.

ANEMONES
After a few hours of looking mainly toward my feet, seeking sea treasures, I realized the tide had quickly receded and rocks and tide pools were emerging everywhere. Anemones were waving their many arms in the shallow moving water, ranging in size from tiny to five inches across. I photographed them from above and also tried, for the first time, underwater shots using my new Olympus Tough waterproof camera. Some cool images! 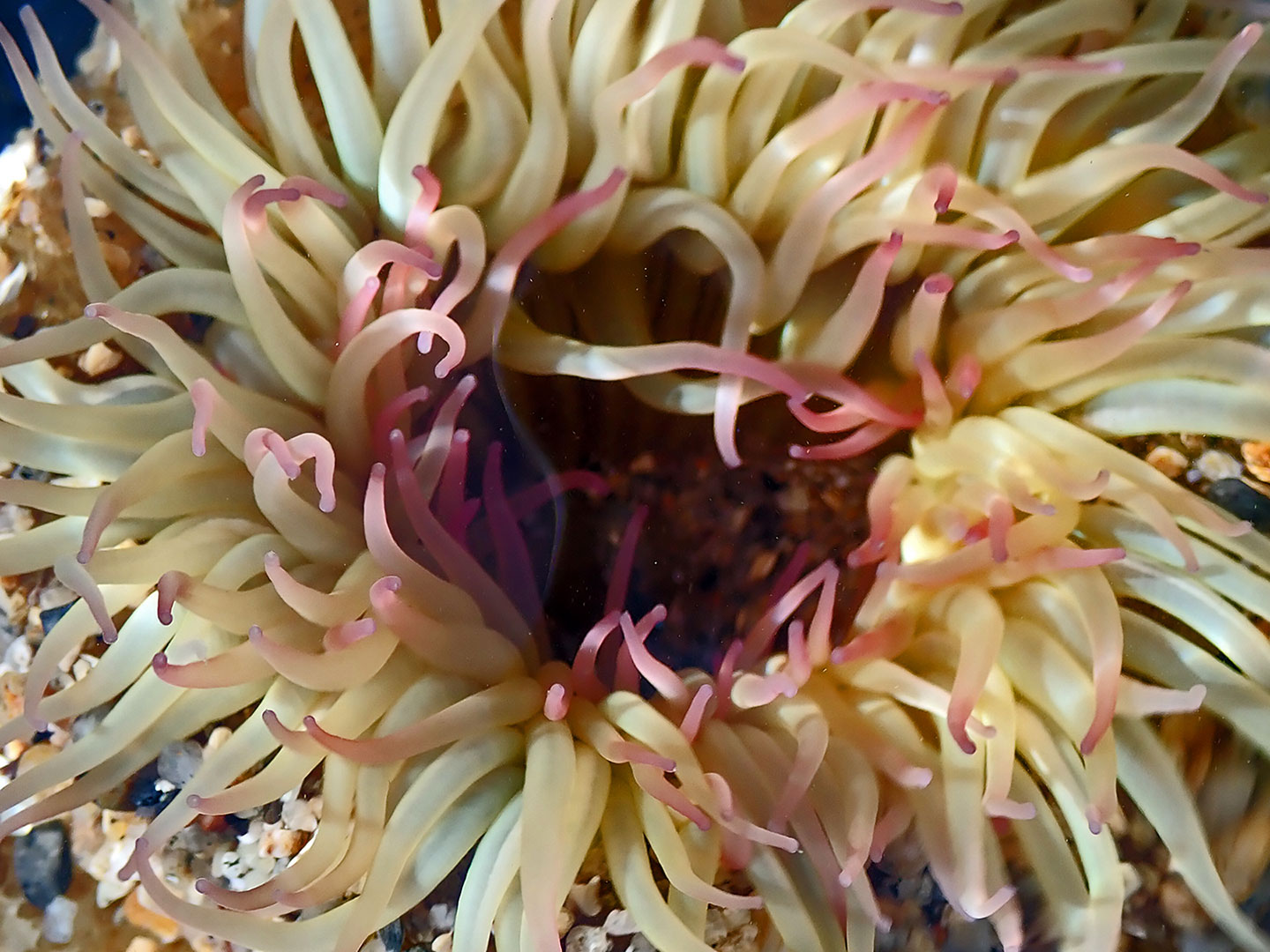 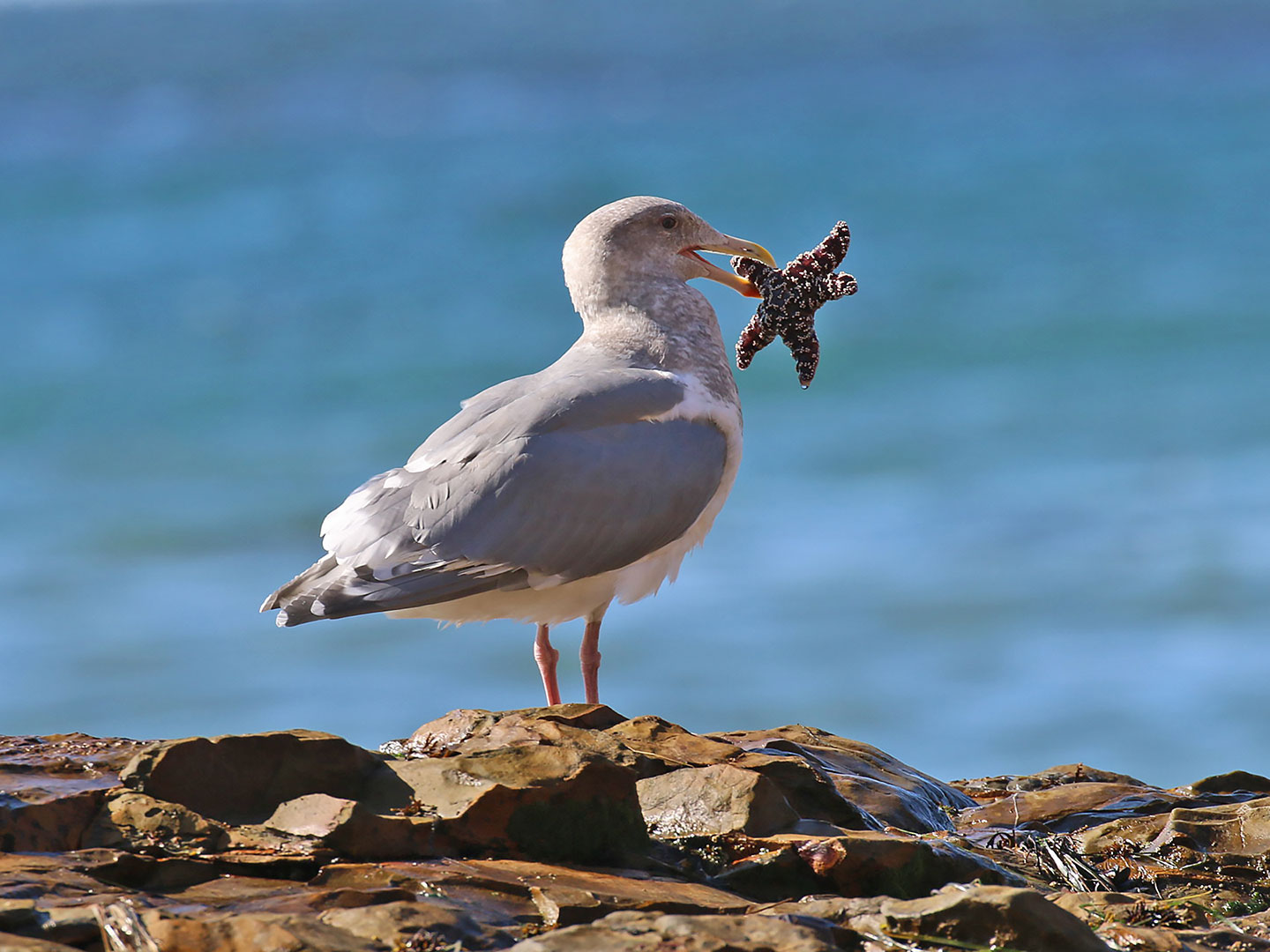 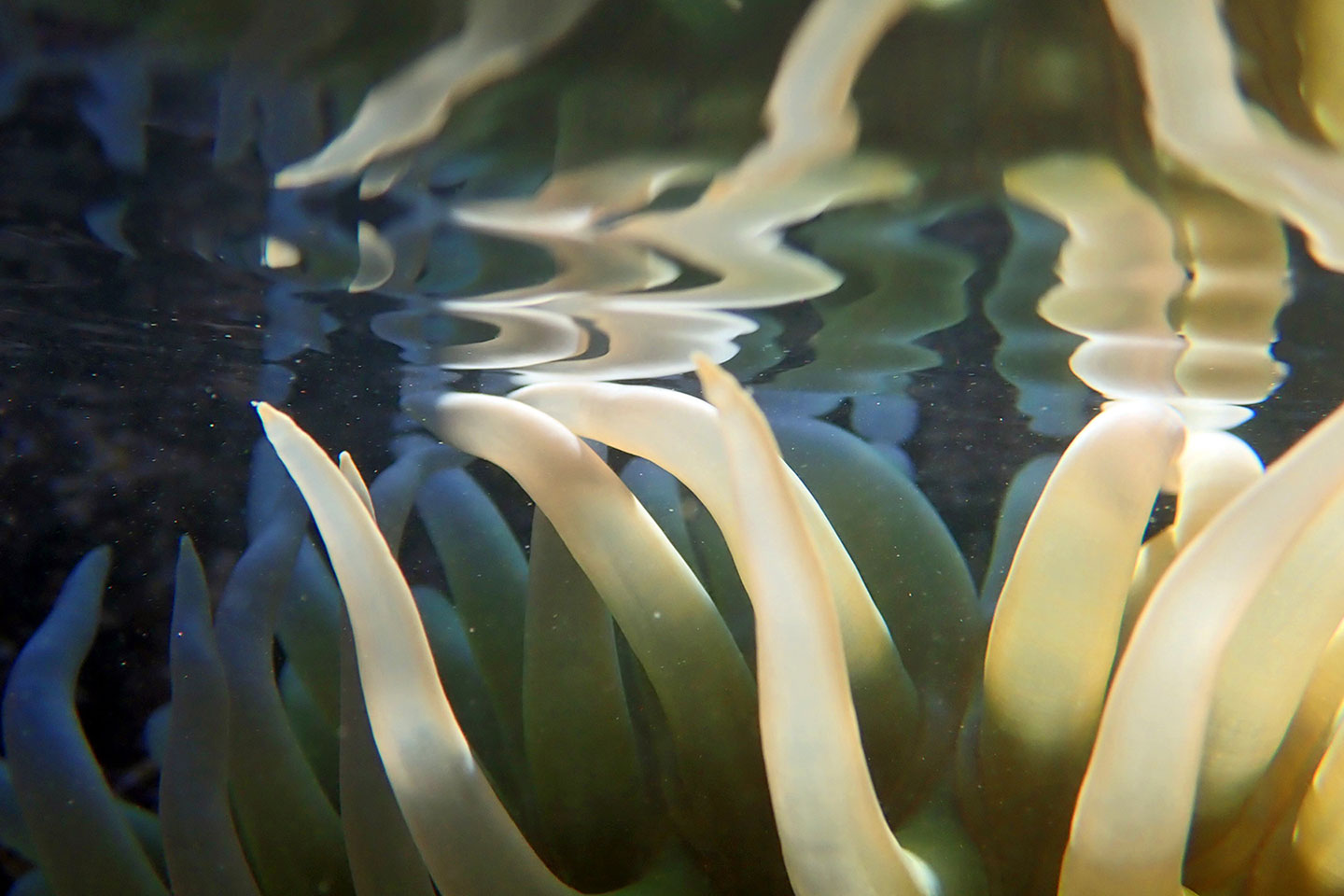 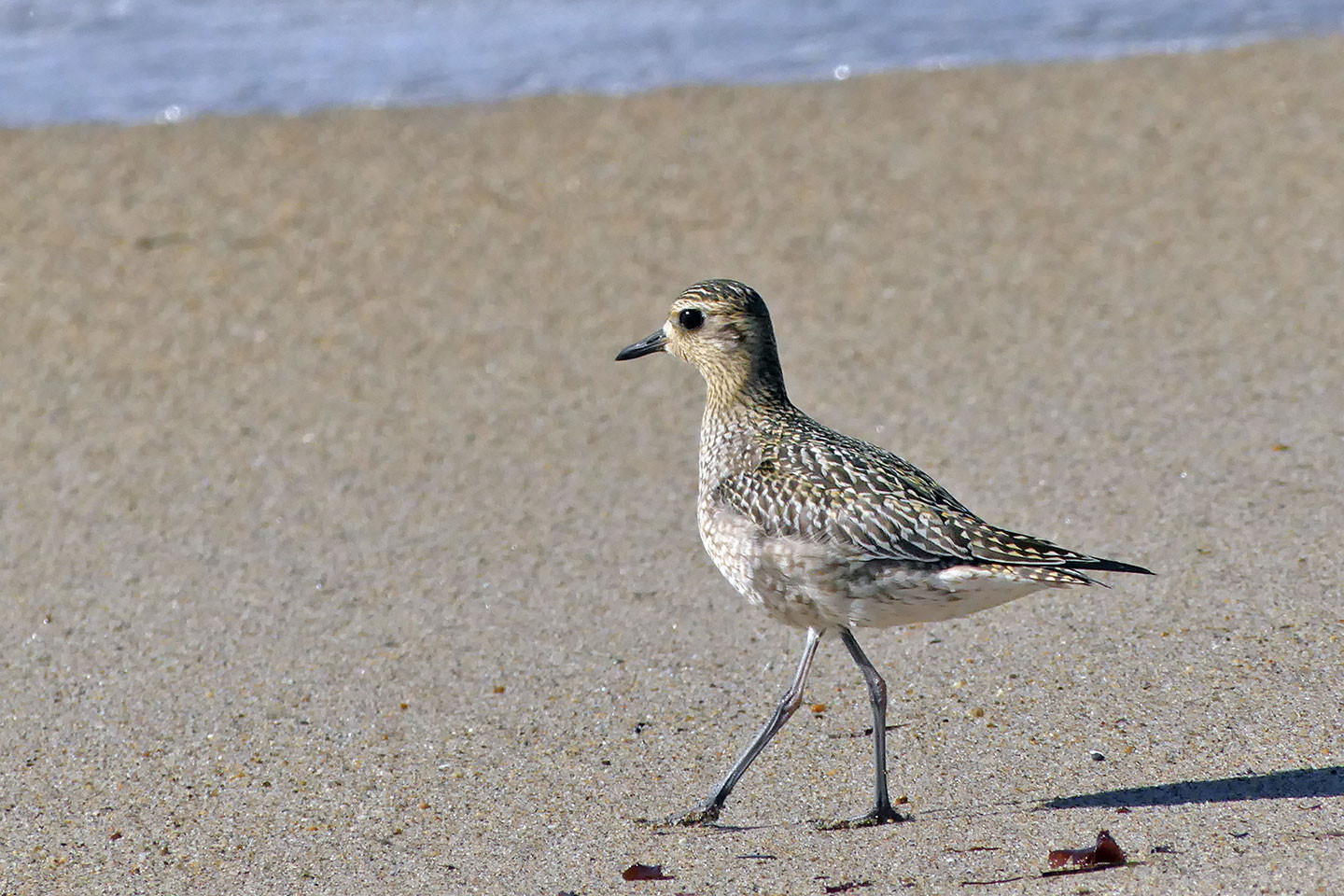 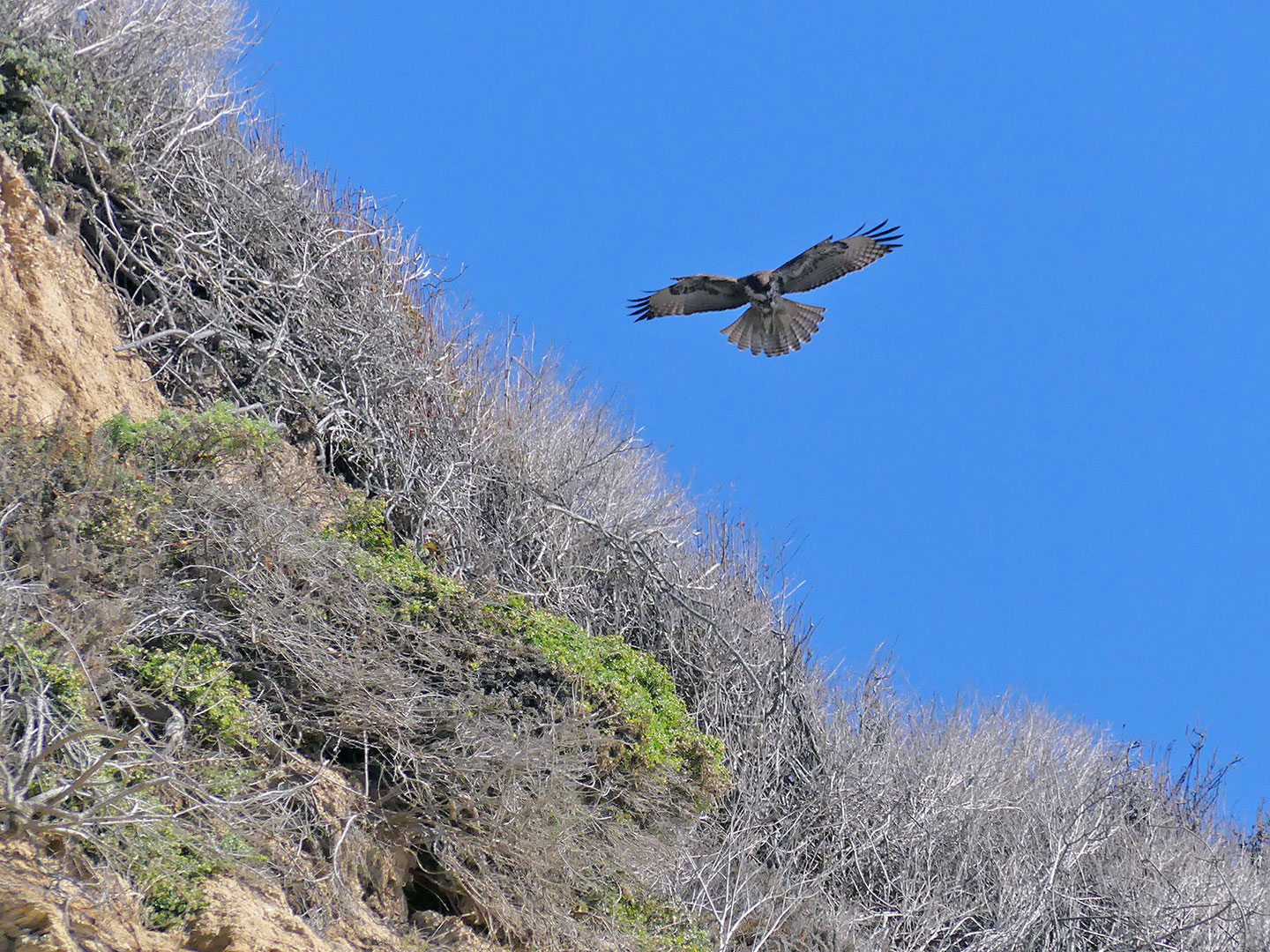 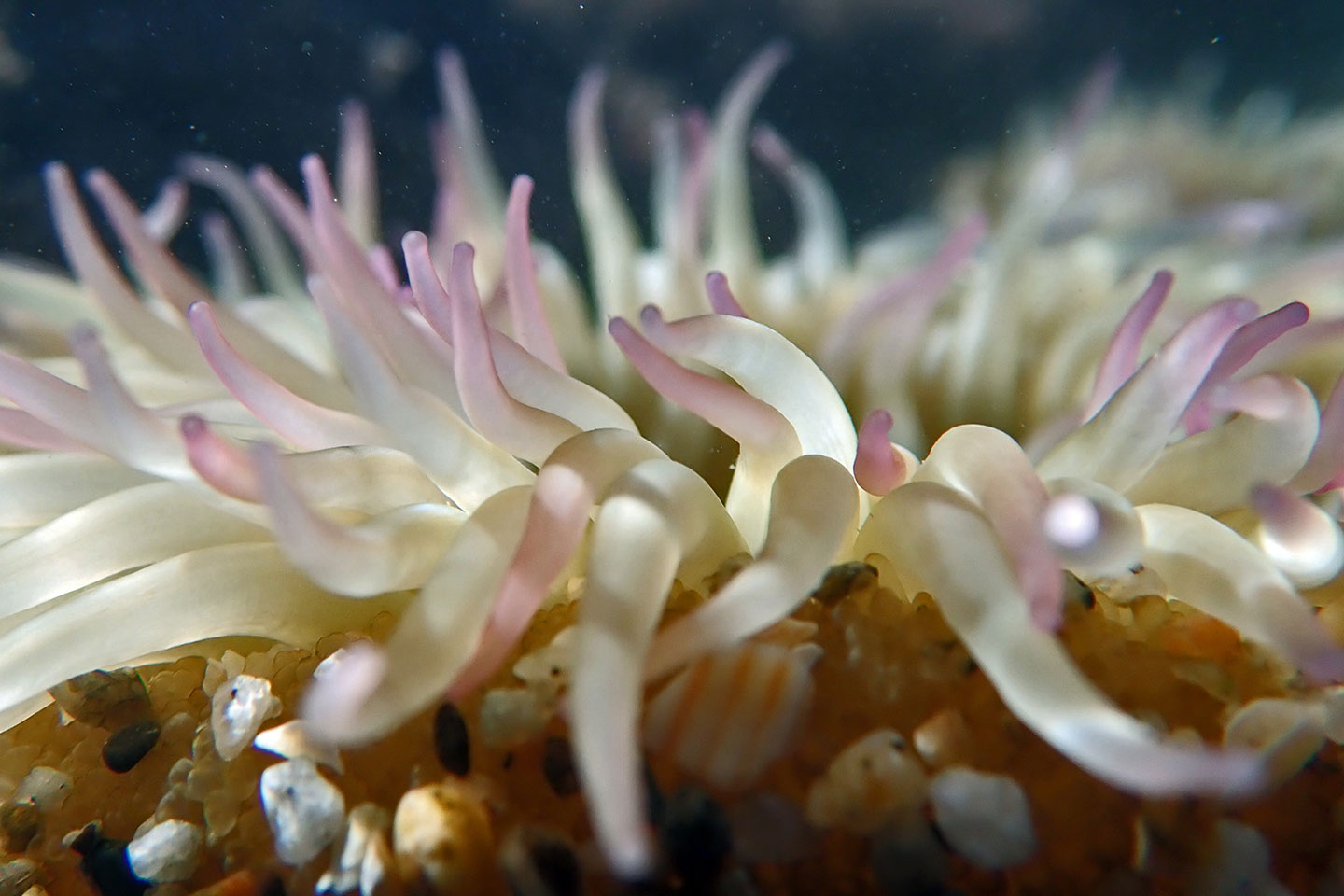