In mid April, I discovered a large nesting colony of Brandt’s Cormorants within easy viewing at Point Lobos State Park in Carmel. Finding a great gathering of birds like this is like finding a wondrous treasure trove in plain sight. I probably should have known they were there; it’s not as if they’ve been hidden. I have been following the much smaller colony at Natural Bridges State Park in Santa Cruz for years.

I wanted to return to Point Lobos as soon as possible. The colony numbers about a thousand adults and the population will at least double as chicks hatch. Here the birds are better positioned for photography than at Natural Bridges.

Point Lobos State Park is now a sixty minute drive instead of ninety. That half hour reduction in time (totaling an hour round trip) makes a big difference and I’ve started planning regular day trips. But there is a problem with Point Lobos: its popularity. It quickly gets crowded and after a certain number of cars enter the park, they close it. I won’t go near it on weekends and even on weekdays you can be turned away by 11:00am.

If you are willing to be patient, quiet and present in nature, you begin to see things that aren’t immediately apparent. The longer you linger the more you will see. I find it takes a minimum of 20 minutes of quiet presence at a spot before you notice the less obvious details in front of you. Once you do see them, you wonder how you could have missed them.

I scanned the panoramic view in front of me, witnessing the nearby guano coated island with active Brandt’s Cormorants, the islands farther out with even more birds, the blue expanse of the Pacific Ocean, and the precipitous sides of both the islands and the peninsula where I stood. It suddenly registered in my vision that there were a few large, dark birds clinging to cliff walls below, tucked into slight recesses in the craggy rocks.

Pelagic cormorants! They are one of three species of cormorants found here. The pelagics are less common and their choice of wild ocean cliff walls for nesting make them more difficult to view in breeding season. They do not gather in colonies like the Brandt’s but find scattered sites along the dramatic coastline of California. Pelagic cormorants are identifiable from other cormorants by their red face – and I would discover red mouth – greater iridescence and white patches on their flanks. When breeding, pelagic cormorants are overall more colorful. From a distance they usually look a solid glossy black but up close, in the right light, the feathers shine green, blue and purple.

When I returned once again on May 3rd the pelagic cormorant guarding the closest nest, stood numerous times showing off a large beautiful white egg. I could only see one egg; I don’t know if there are more coming or if this egg might be their only potential offspring this year. They normally lay 2-4 in a clutch.

Please do not use photographs without permission. To inquire about permission contact Carla at: brennan.carla@gmail.com. 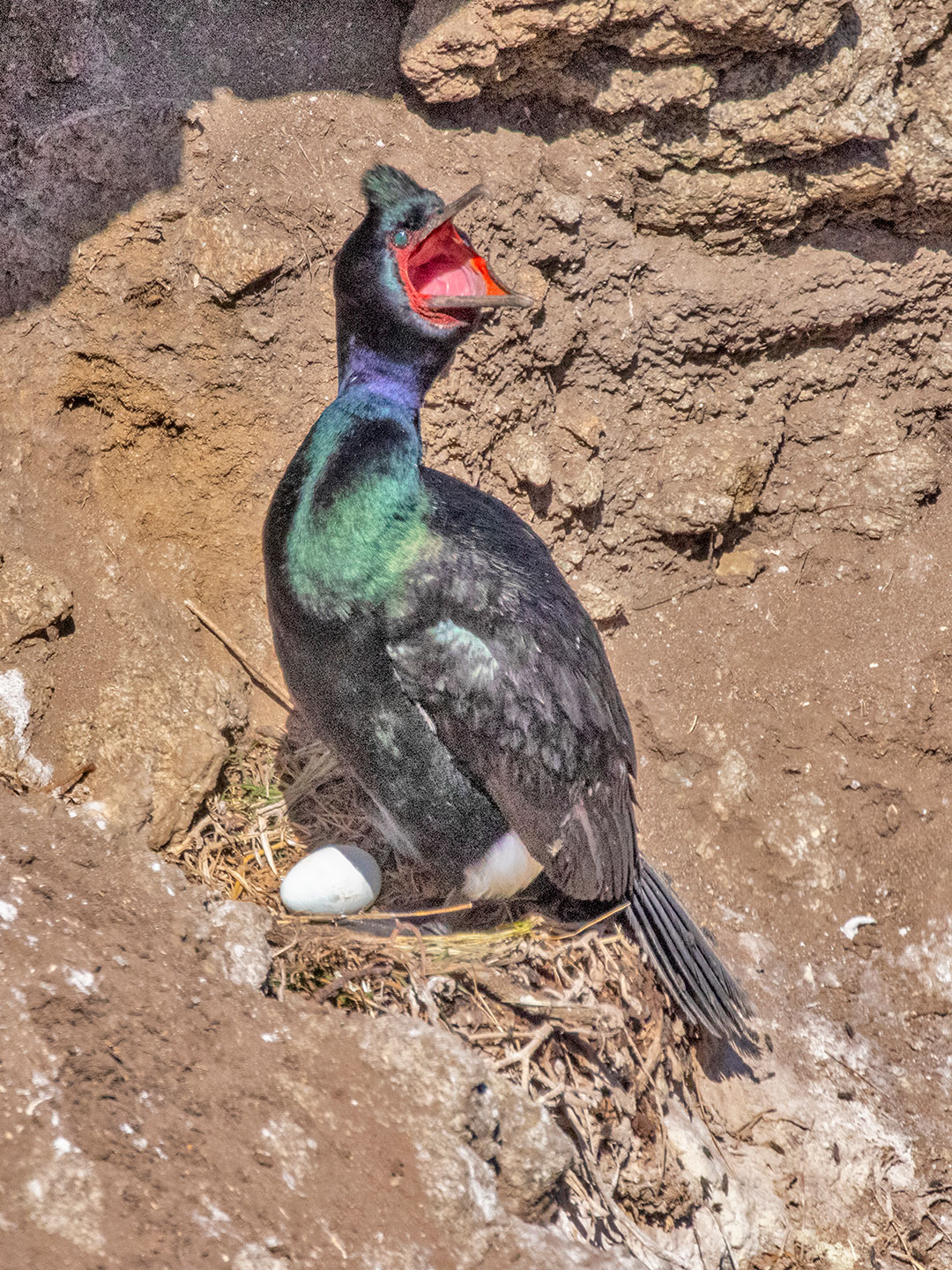 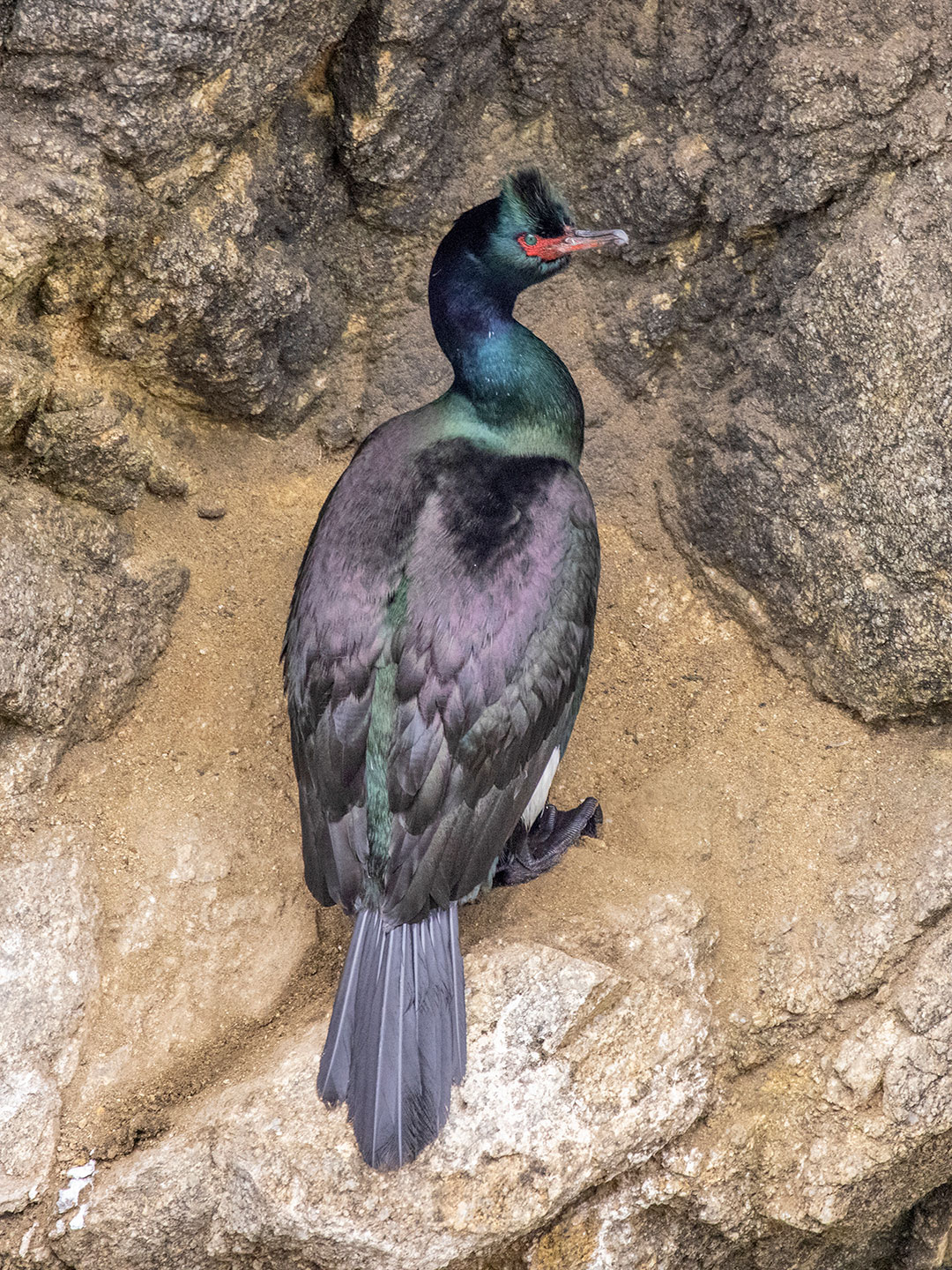 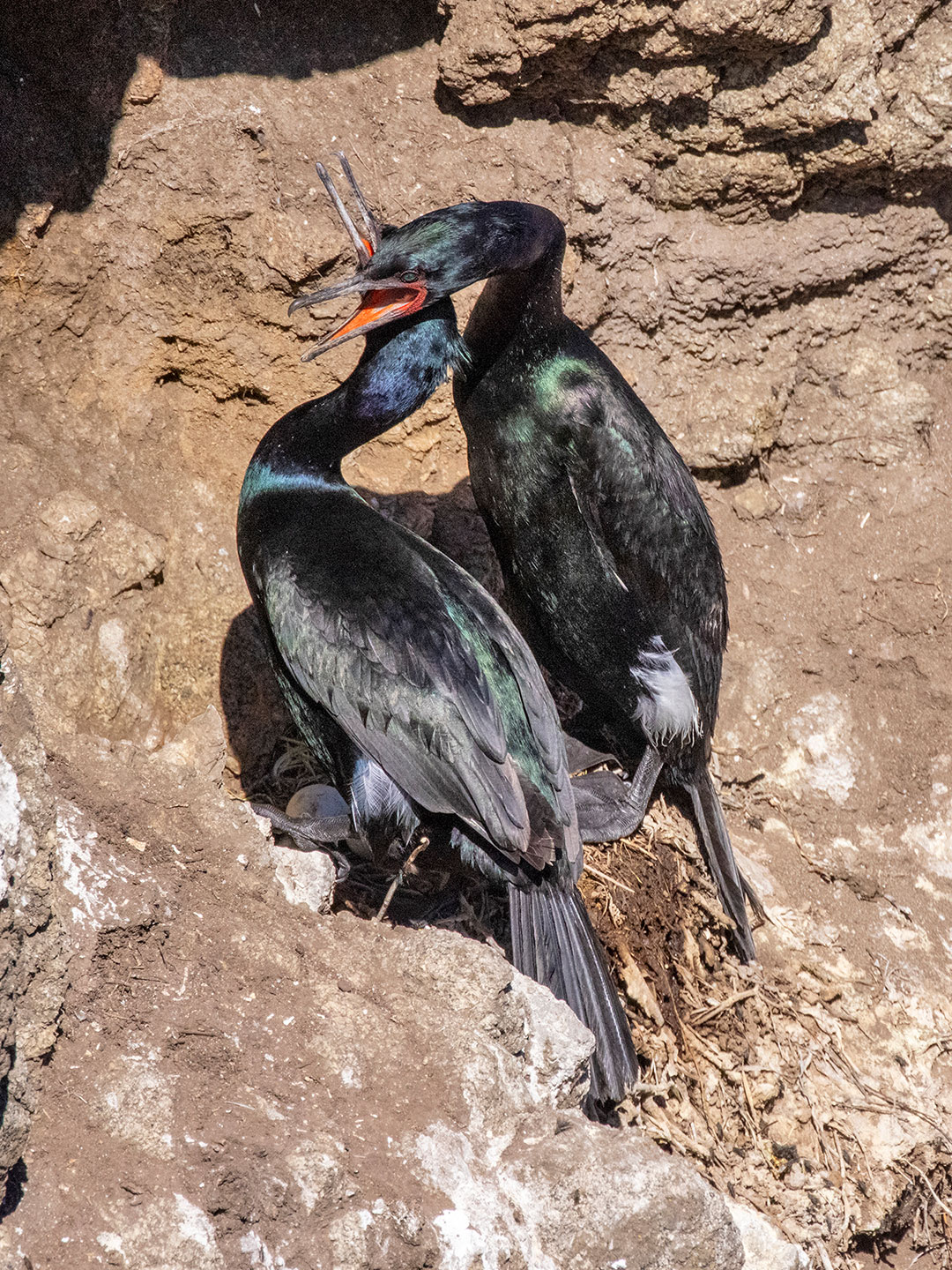