Last week Chris and I went to one of our go-to places: Mercey Hot Springs. Half of the reason I go is for the hot healing waters, the other half is for the wildlife, and sometimes, wildflowers. And let’s not forget to mention the open arid landscape, the skies, stars and moon. In the trees of this small desert oasis are long-eared owls, great horned owls and barn owls. If you follow this blog, you’ve already seen some photos of these impressive enchanting birds. But on this trip the owls were elusive. Only a female great horned owl could reliably be seen, sitting stoically, unmoving on her nest of eggs. The barn owl made a brief appearance, emerging and disappearing quickly like a ghost, from the dense tangle of treetop limbs. I also saw, for a few moments, a golden eagle flying overhead.

The wildlife that was abundant and visible were desert cottontails, the food source for the owls as well as other raptors, foxes, coyotes, weasels and bobcats. California ground squirrels were everywhere too. They all were darting in and out of dense bushes and underground holes. So I focused my camera on them. They live in and around the shrubbery that lines the small muddy creek. But they frequently ventured farther afield, at their own risk, to eat the new green luscious spring grass.

I began to recognize individual rabbits, mostly by the unique scarring on their ears. It’s like how they identify whales, by the marks on their tails. One rabbit, I named it “Our Bunny” because it hung out in or near our campsite, was missing half an ear. I imagined on owl grabbing for this fleeing cottontail only to get away with some flimsy ear skin in its talons.

Speaking of ears, in the morning, at the right angle, I could sometimes catch the bright low sun shining through their pink ears, making it seem as if they were illuminated from within.

Our Bunny liked to crawl under the bush right next to our camper, resting only a few feet away. The bush branches were still bare, the buds just starting to leaf out. So even though the rabbit thought it was hiding, it was clearly visible. Admittedly, you had to know it was there because its coloration matched the shadowy dirt underneath. One time, as I watched it hopped toward the bush from the creek bed, it paused first to munch on some dirt. Yes, dirt. I have a photo of it. I figure they eat soil in order to add minerals and salts to their diet. I later saw a ground squirrel eating dirt. Because of the hot springs the ground here is probably particularly rich in nutrients. When I was very young I love the smell of mud, and would occasionally eat it.

California jackrabbits are my favorite bunny. They’re big, they’re fast and their ears are humongous. They can probably pick up transmissions from space. But they’re skittish and evasive and rarely seen close enough to photograph.

House finches, a common bird, shared their cheerful chirping each morning. The males’ red heads made them photogenic. Mourning doves cooed they’re sad keening all day. White-crowned sparrows pecked relentlessly in the dirt and sometimes bathed in the creek.

So just in time for Easter, I’m including here a selection a bunny portraits. 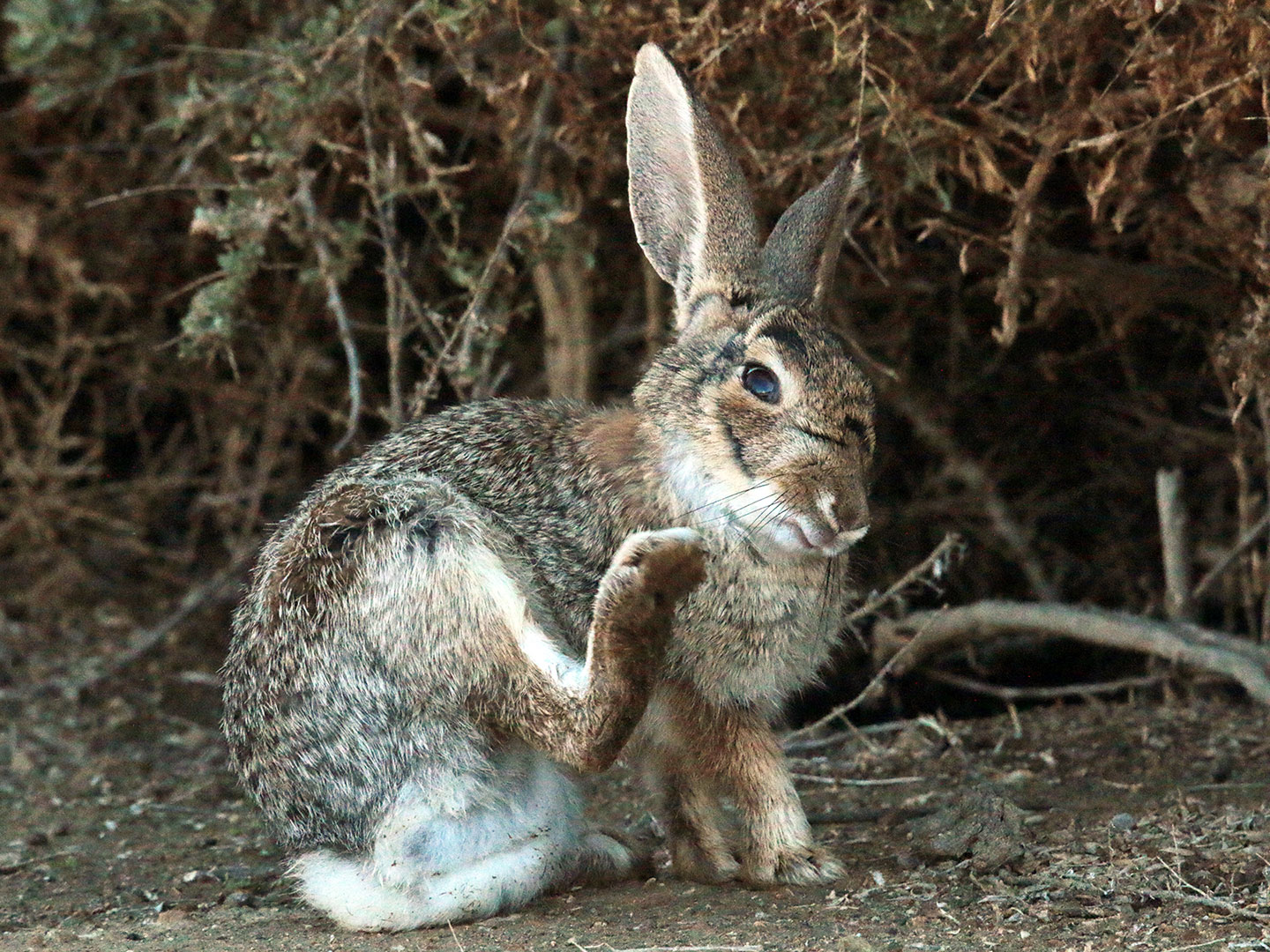 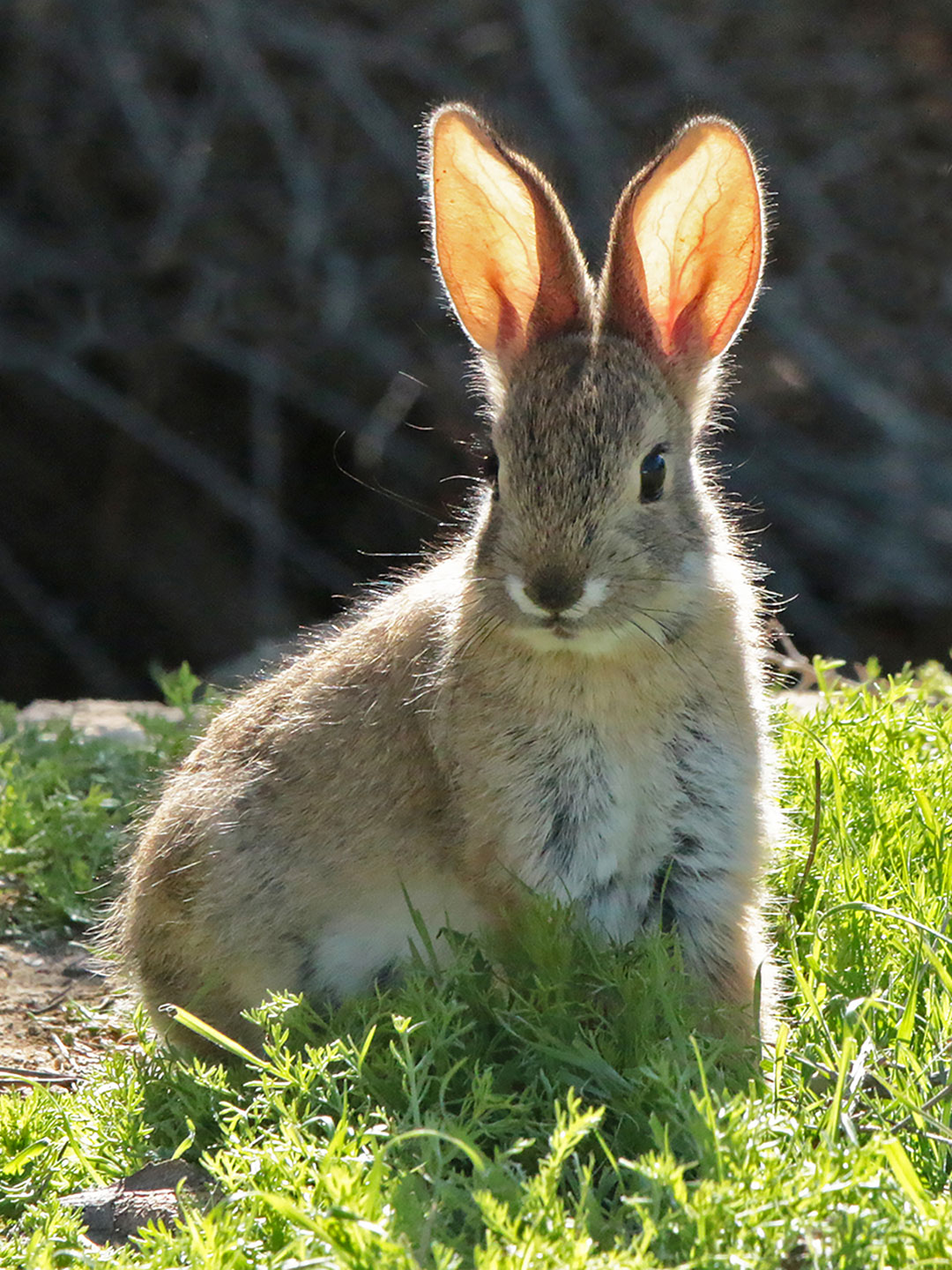