The Birds and the Bees and the Elephant Seals

The Birds and the Bees and the Elephant Seals.
February 27, 2018.
Ano Nuevo State Park, Pescadero, CA.

The last time I visited ANSP (and created a post about elephant seals) was four years ago. At that time I vowed to visit several times a year. I have failed at that but with my latest visit I have renewed my intention to frequent this special place. Go to the park website here for more information: http://www.parks.ca.gov/?page_id=523.

To come here is a significant commitment of time, at least 3-4 hours (plus over an hour driving). I felt called to go on the 27th and see if I could get into a scheduled tour. (You must be on a docent-led tour to see the seals.) The ranger at the kiosk said a tour was leaving in 5 minutes so I made a beeline to the visitors center to purchase a ticket. Our group had only three people (there can be up to 25) so this tour was more personal and spacious than most. Two of us carried long heavy telephoto lenses on Canon cameras.

After the long walk to the rookery, we found a variety of elephant seals strewn inert across the dunes and beach. Females, sub-adult males, adult males, nursing pups and weaners (pups who have finished weaning and are no longer attended by their mothers.) Many of the seals had already left for their 5 months at sea before they return next summer to molt all of their skin and fur.

A few pups were still nursing, cloaked in black fur to absorb heat from the sun while they fattened up from the thick rich milk. The weaners were no longer black but silvery. Some were so well fed that they looked like sausages about to burst their casing.

Little was happening except grunts and squeals and occasional sand flipping. Then the action started.

The alpha bull directly ahead decided it was time to finish his mission to mate with his harem. The sudden and aggressive forward launching of his blubbery massive body caused the other males in the area to scatter, in their clumsy, fat-rippling way. Cows cried, heads back and mouths wide open, in excitement or protest – I am not sure which. More giant slug-like bodies began moving aside as the male chose a female. Afterward, he approached several other cows but I am not sure if the act was consummated. It was a little hard to tell.

Eventually the bull settled down and fell asleep, mouth open, exhausted from the effort.

This alpha bull had been in a fight a few days earlier; our docent had witnessed it. Ragged, red wounds pot-marked the right side of his face. And he was the winner. I’d hate to see what happened to the other guy.

You can check out the blog post and photos from 2014:
https://carlabrennan.com/2014/03/23/photographs-of-the-week-ano-nuevo-state-reserve-ca/

Please do not use photographs without permission. 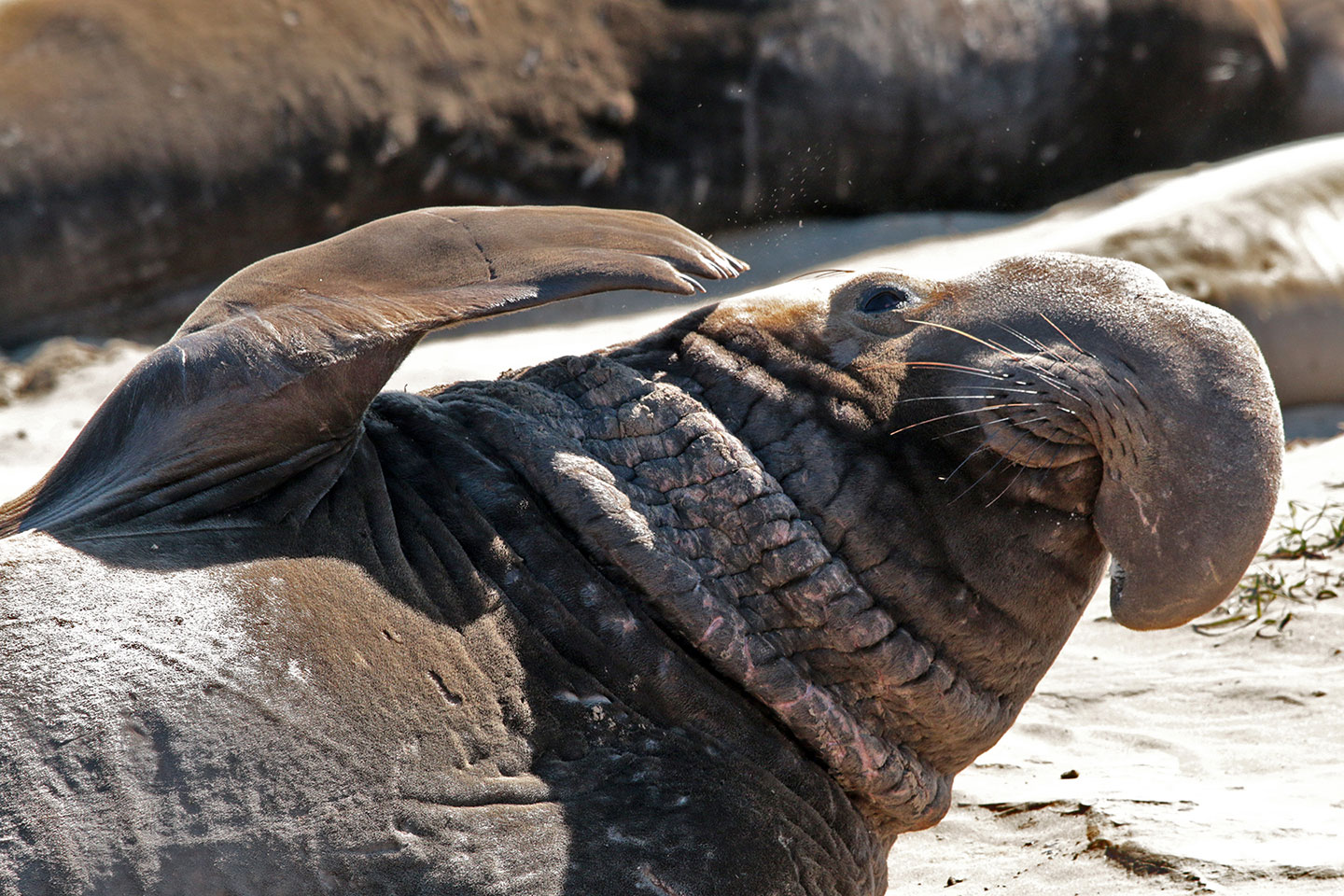 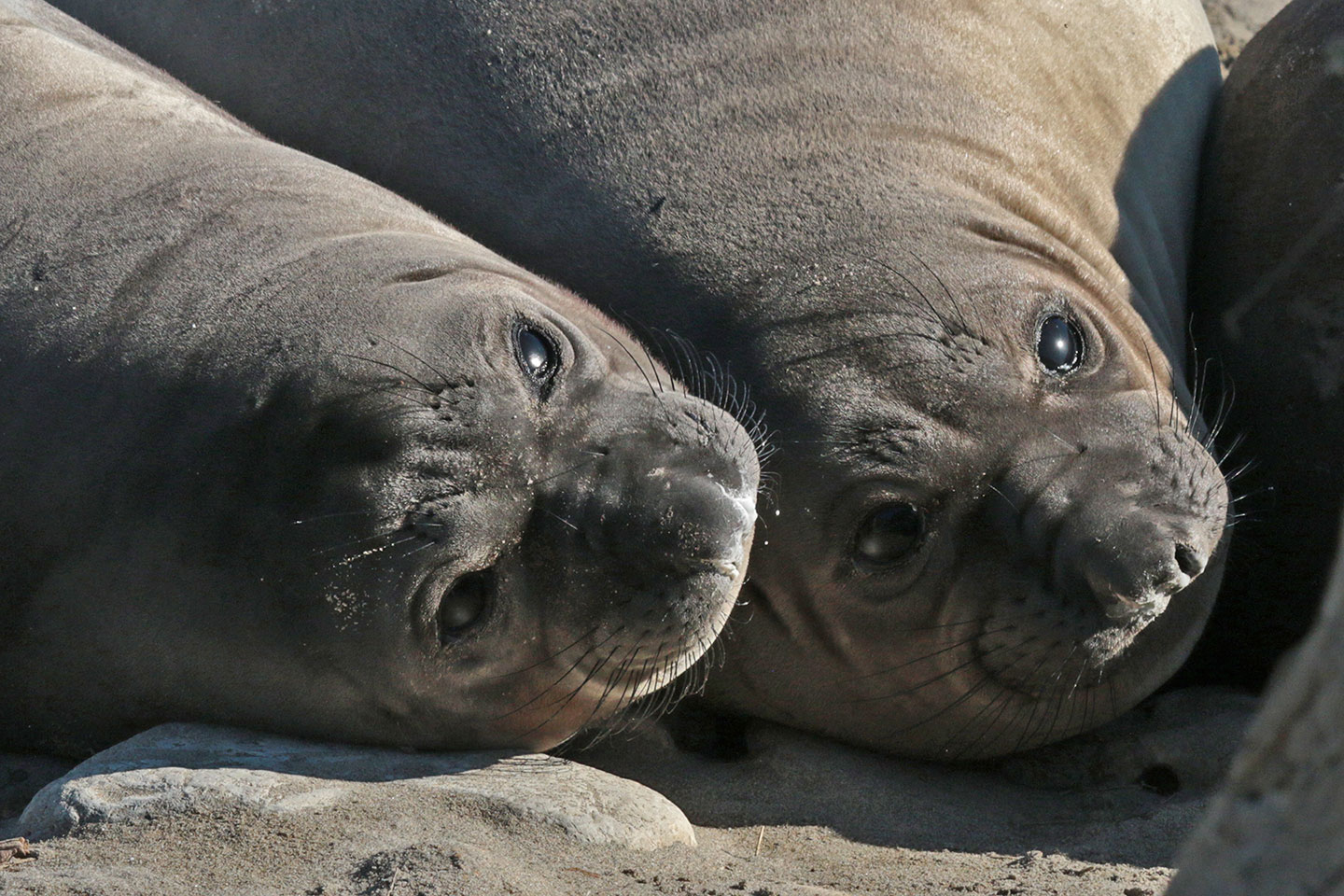 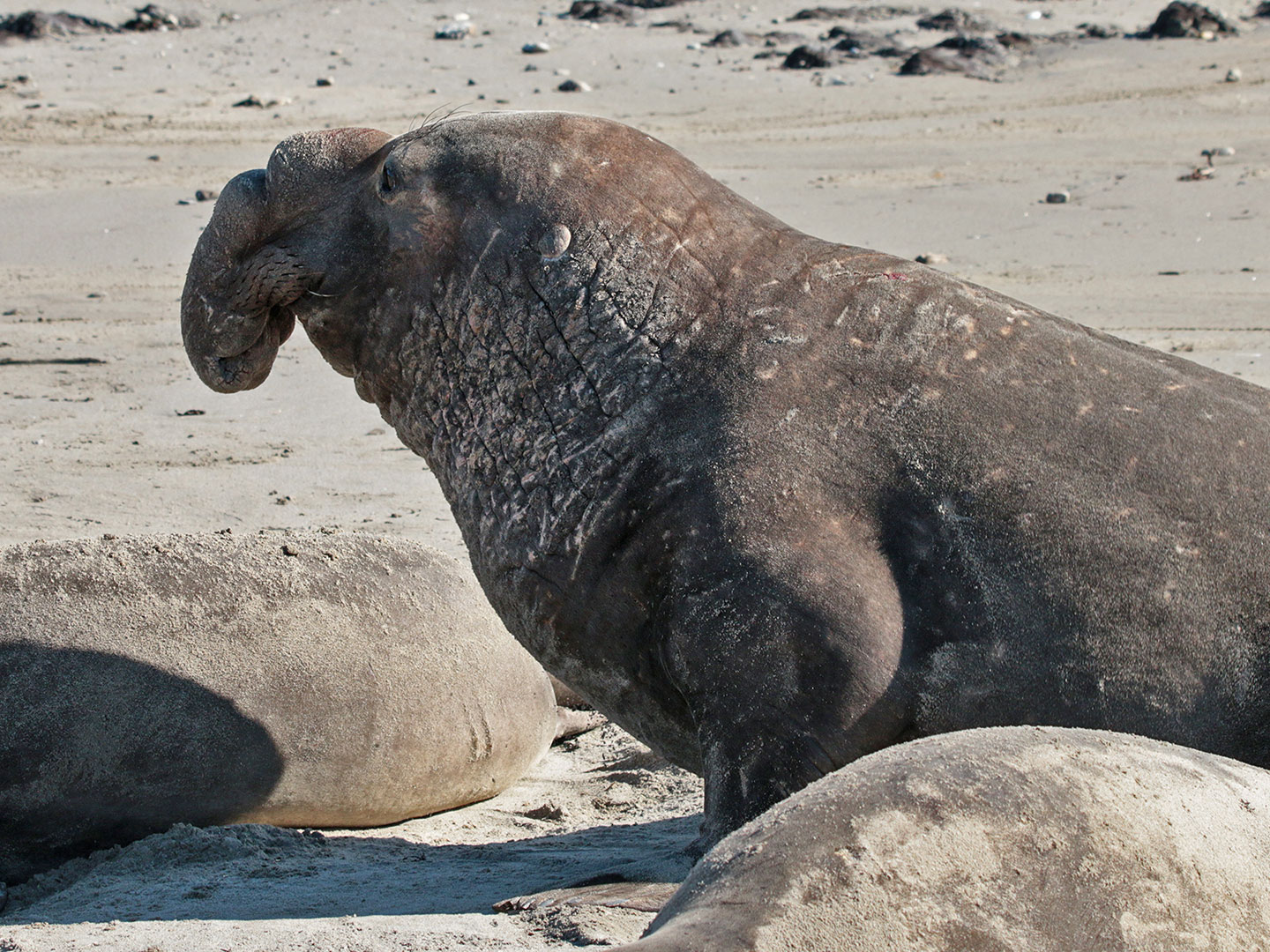