And I don’t mean Thanksgiving dinner. It’s that time of year when male turkeys strut their stuff. There is nothing as strange or spectacular as being close to turkey toms displaying and courting females. It’s equal to the show that Birds of Paradise put on, only these birds are really big and in my yard (instead of Papua New Guinea). We take this marvel of avian behavior for granted because we see pictures of it everywhere every fall.

A flock of about 15-20 birds (it’s hard to keep track) gathered in our yard in the morning for some ritualized interactions. At least six males walked proudly, all in fluffed up in bold iridescent feathers, with tail fans waving and, most odd of all, showing off the flesh on their heads. The wattle engorges and turns alternating red-white-blue as their mood changes – a head like a mood ring. The flesh that hangs over their beak is called the snood and all those bumpy head growths are called caruncles.

The males like our cement driveway because their noisy wing feather dragging is louder there than on dirt and it attracts more attention. Numerous hens seemed quite interested in all this activity. I have, in the past, seen males displaying ardently with the females completely ignoring them.

Wild turkeys were only introduced to California in the 1960’s and 70’s. In the Bay Area they have become quite common. 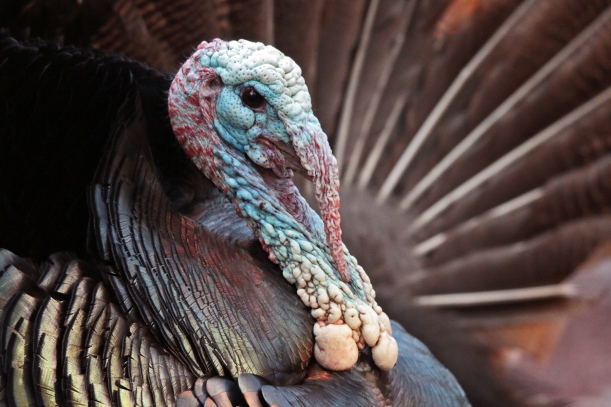 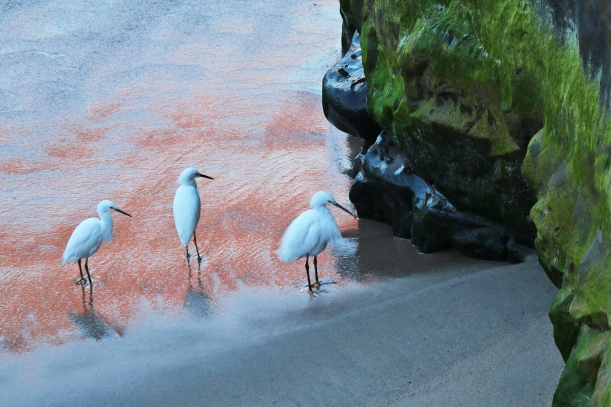 Looking down into a cove at sunset,
seven snowy egrets played at water’s edge.
The last daylight reflecting off the cliffs
turned the water pink.

Off on a Sunday afternoon to Moss Landing for some wildlife viewing and beach walking. I was most interested in identifying birds this trip but I was also on the lookout for otters, seals and sea lions. It was a pleasant day and I spotted a variety of shorebirds: long-billed curlews, willets, black-bellied plover, mallards, blue-winged teals, buffleheads, black-necked stilts, terns, and lots of gulls. The tide was quite low leaving an expansive mud flat on the bay, attracting some birds.  At the top of a far barren tree perched a white and black raptor. I first assumed it was an osprey but then realized it was a kite, a white-tailed kite. A new bird for my Life List.

With its inner bay, tidal flats, marshes, open beaches, and estuary, Moss Landing offers a wide range of wildlife habitats in a relatively small area. This place is not free of humans, however. It is home to whale-watching and fishing boats and the world famous Phil’s Restaurant as well as the Monterey Bay Aquarium Research Institute. That Sunday was also the weekend of the big Pebble Beach PGA tournament nearby in Monterey so we were concerned extra sight-seers might be on the highways and at the beaches.

The road into Moss Landing crosses a small lagoon near a marina. For some reason in this confined area there are often a few birds and an occasional otter. It’s easy to park there and sneak up for some relatively close photographs. Sure enough, there were two great egrets, a pair of eared grebes, and double crested cormorants. A snowy egret landed while I was shooting.

One great egret stood still and elegant on a rock for quite a while. Suddenly she spotted some prey, invisible to me beneath the water. Leaping forward, she plunged completely into the lagoon with only her upper angel wings above the surface. I had never witnessed one of these large wading birds completely submerge itself. The egret then burst from the water, flapping wildly toward shore with two anchovies! What a catch!

One fish was crushed between the jaws of its beak and the other was impaled on the pointed tip. It took patience and skill for the egret to reposition the anchovies so it could swallow them. But eventually the fish disappeared down its gullet and the great egret resumed its still and elegant pose.

Walking on West Cliff Drive on the Westside of Santa Cruz, I sought the Brandt’s cormorants I had seen a few days earlier. Cormorants are common and plentiful so most people simply ignore them. But when I saw a group of cormorants close together on a rock ledge, I knew something was up. Sure enough, closer examination revealed it was a small rookery of nesting birds. Or at least birds getting ready to nest.

Numerous piles of seaweed were placed a few feet apart. Some birds sat on the messy disorganized mounds of ocean plants while others stood nearby protecting their small territory. When a bird flew off to feed or it looked the other way, another would snatch a beak full of fibers. If one got caught in the act, noisy squabbling and beak jabbing  ensued.

Their breeding hormones had transformed their throats into a vivid cerulean blue that matched their eyes. White stringy feathers sprouted from their heads and backs, contrasting their sleek black bodies. They impressed each other with ritualized courtship behavior: heads thrown back, tails skyward, wings curled and vibrating. Sometimes they would just shake their heads vigorously, mouths open. Below, waves crashed against the cliff.

To see a video of a Brandt’s cormorant displaying go to: https://www.youtube.com/watch?v=Lo_3aAL3geo

And see a nest material theft in progress: https://www.youtube.com/watch?v=3KP1rO4GfHU

I plan to visit this colony regularly to watch them build actual viable nests, lay eggs and raise young.

On my way to my car, I spotted a snowy egret playing in the surf. I swear that was what it was doing. Without any apparent attempt to feed or do anything practical, the egret would walk into the oncoming waves, enjoy the flowing foam around its legs then lift upward quickly when then water became too deep. It then flew back toward the cliffs and started the game all over again.

Then onto Soldiers Field to check out the Monarch butterfly situation. I was surprised to see them still there, energetically flying about in the warm sunny air. No doubt they won’t be around much longer.