Salida is about 60 miles north and an hour drive from Crestone. If I ever move to Colorado – which I not-very-seriously consider from time to time – I think Salida might be a good choice. A small town in a broad valley surrounded by a dozen 14,000 ft. peaks that offer skiing, hiking, and mountain biking. There are several hot springs nearby including a town-owned large hot springs fed indoor swimming pool which provided exercise, relaxation and needed showers. A white water river – the Arkansas – runs right through town. With a very active arts community, good food, and alternative offerings, what more could you want? (Well, Chris would probably say, “an ocean and milder winters.” In other words, California.)

We camped for a week at a free campground two miles from the center of town run by the state. It was along Rt. 50 and adjacent to a boat ramp on the Arkansas River. To one side of us was the river’s gentle roar, to the other side the rumbling of traffic. A few feet from our campsite the ground dropped steeply to the river below. The hillside was covered in small oaks. Halfway down, following a slippery trail, I attached my hammock. There I could gaze to the treetops and blue sky, to the waters dancing over rocks, and to the opposite mountainside. The highway was still slightly audible but the gurgling chatter of the river spoke loudest.

We were camped at the western mouth of Bighorn Sheep Canyon. I didn’t expect to actually see any sheep here since it was still the outskirts of Salida, with a commercial RV park next-door, a restaurant across the street and the busy Rt. 50. Yet on our first morning, a small herd a bighorn sheep made their way slowly along the river and up the steep mountainside we faced. Walking to get a better view, I soon saw a small group of campers decked out in cameras and binoculars. The sheep were lined in a row on a lighted ridge; something then spooked them and they ran up the hill eventually stopping to graze on the rocky slopes in the shadow of the still rising sun. I took numerous photos but the distance and low light made a clear shot difficult.

We met Matthew there, an itinerant massage therapist, working the summer at a spa in Salida. His next stop would be southern California for the winter. People at free campgrounds often seem friendlier than at paid ones. They are eager to share information on other free sites and quick to complain about people who abuse the places they camp in. Every type of person camps here, from people in fancy huge RVs to the homeless in tiny ragged tents without transportation. Not all people here are “upstanding citizens” as Matthew said. Much of the area looks overused and mistreated, battered and worn. Broken glass and litter were scattered about. A recent camper left three garbage bags of trash strewn where they had stayed.

But this spot had its advantages – it’s free and maintained by the state (a ranger drove through periodically), it’s along the river which is scenic and offers bathing, a boat ramp and a bathroom, there are large and small mountain views, and end-of-summer sunflowers blooming everywhere.

In walking distance was a lone restaurant, the Buffalo BBQ, so one night we went there for dinner. The owner, relatively new to the area, told us had moved to Salida from a smaller town higher up in the Rockies. He bemoaned the low elevation here at “only” 6,000 feet. He claimed that “life starts above 10,000 feet” where one feels more alive and healthy. Adjacent to the restaurant was his collection of motorcycles and other unusual items. The whiteboard claimed that the dessert special was “better than sex”. Recalling “When Harry Met Sally”, I ordered a serving. It was pretty good but only better than mediocre sex.

The road across the highway from the campground led into an expanse of hills with juniper-pinyon pine forests. Several times I wandered there looking for wildflowers, wildlife, big views and a mysterious “badlands” area I had heard about but that eluded me. How could a large, unusual desert-like canyon be hard-to-find? After several attempts, I finally did locate it by using my geocaching app to direct me to a cache hidden there. It turned out that the directions given me were faulty; the way there was actually pretty simple.

By the end of summer the Arkansas river is low but it was still navigable by small boats. Chris rented an inner tube and I took my kayak. We put in at the center of town and floated along a couple miles until we reached the boat ramp near our campsite. People have altered the river bed in town to create a short whitewater park with drops, waves and playholes. The first drop swamped my boat and upended Chris and his inner tube. No harm done – I pulled over 100 yards down river to empty my boat. But, unfortunately, all manner of tourists were standing on shore and a balcony of lunchers watched at the Boathouse Cantina, witnessing the humiliation of our poor whitewater skills. The trip was fun; our only complaint was that it was not long enough.

The only pink trumpet I saw anywhere. 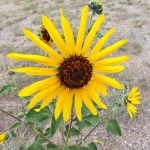 You can’t tell scale here but this was by far the largest wild sunflower I saw. Its bloom was larger than a large dinner plate.